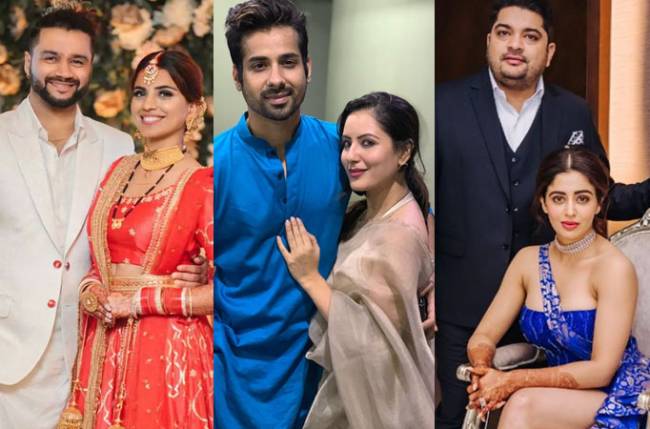 Reality TV show’s judge and singer Neha Kakkar tied the knot with Rohanpreet Singh in the last week of October. While their social media is flooded with their wedding pics, this Karwa Chauth will be the couple’s first celebration together.

The Shakti actress tied the knot with Delhi-based Shalabh Dang on 10th February. Their Karwa-Chauth celebrations have already begun from last night itself (3rd November). Kamya has posted pictures of hubby Shalabh applying mehendi on her palms. Ain’t that cute?!

Madhubala – Ek Ishq Ek Junoon actor Gunjan Utreja is looking forward to spending the day with his wife Deepika as shooting-life has been keeping him really busy. “I will be fasting with her since I, too, want to pray for her long life. I have decided that it will be a no-phone day for both of us, so that no one disturbs us. Apart from my time and attention dedicated just to her, I have planned to get her some presents to make her feel special. These include clothes, jewellery, plants and home decor items that she fancies.”, he revealed.

This year’s Karwa Chauth is very special for Kunal Verma and Puja Banerjee. They got hitched after dating each other for a decade and have also welcomed their son this year itself. Kunal feels that the baby is the greatest blessing in their lives. “Since Puja had a C-section, I don’t want her to keep a fast this year. I just want her to focus on her health. It’s an important festival for us, but it would be a low-key affair this year.”, Kunal reveals. However, Puja wishes to fast and buy her entire attire online.

The May I Come In Madam fame Nehha Pendse tied the knot with her boyfriend Shardul Singh Bayas on 5th January this year. This will be their first Karwa-Chauth as well.

Television fames Balraj and Deepti had a hush-hush wedding in August and revealed about the same much later. This Karwa-Chauth is definitely going to be a special one for them.

Ishqbaaz actress Niti Taylor is all set for her first Karwa Chauth. The actress gave a glimpse of her elaborate mehendi. She tied the knot with beau Parikshit this August and announced the same in October.

Manish Raisinghan shared, “Since I live with my parents, the rituals would be taken care of by them. First of all, I would be fasting for her as she would be for me. Additionally, I am also figuring out a nice romantic candlelight dinner for her because she loves stuff like that.”

His wife Sangeita further added, “I have a red Patiala suit with zardosi work which I will wear; I want to go in for sustainable fashion for this festival. I am really excited as I will be breaking my fast in full filmi style as we see in movies and shows. Since I live with my mother-in-law, whatever she says, I will follow.”.

Kundali Bhagya actress Ruhi Chaturvedi has already planned to go to her parents’ house while Shivendraa too, has planned a few surprises for his wife. “We wanted to go to Jaipur where Shivendraa’s family is, but in this situation now, we will be going to my mother’s place. In my home, a katha will be narrated which I would listen to. I think keeping the fast would be challenging for me because I have a habit of drinking a lot of water and here, I cannot even drink one drop. Shivendraa had gifted me a red brocade sari post our marriage, so that would be the perfect attire for the day as it is very special to me.”, she reveals.