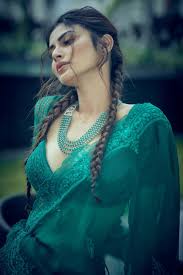 Mouni Roy is a beautiful actress. The actress’ before-and-after photos will leave you amazed!

Mouni is a girl from a small city in West Bengal, would one day go on to rule the entertainment industry! She was a popular face in the world of Indian television at first and soon after, went on to bag one project after the other in the film world.

Ekta Kapoor spotted a performer in Mouni and in 2006, she became a part of Kyunki Saas Bhi Kabhi Bahu Thi as Krishna Tulsi Eklavya Virani. And since then, there has been no looking back for the actress.

Mouni has climbed her step high in the industry ever she entered in the industry. Someone, who can gracefully own any attire she wears. Her fans have witnessed her hard work and respect her glam life.

Mouni Roy is a complete beach babe. She keeps her fans updated while she recently posted many photos wearing hot bralettes, crop tops with stylish hairstyles and posted her picture-perfect vacation clicks on Instagram.

Apart from playing supporting and lead roles in many popular telly shows, Mouni made her big Bollywood debut with Gold with Akshay Kumar that released in 2018. The film went on to become a massive success and hit the blockbuster boards. Prior to that, the actress made an array of special appearances in songs from films like K.G.F: Chapter 1, Tum Bin II, etc.

A ride towards her personal life

The actress has been linked up with many men from the world of television and music. She was once rumoured to be dating Gaurav Chopra and her Devon Ke Dev…Mahadev co-star Mohit Raina. Later, she was even linked to her Brahmastra co-star Ayan Mukerji but the rumours ended super soon.

Currently, the actress is the hot topic while she is rumoured to be dating Dubai-based banker Suraj Nambiar.