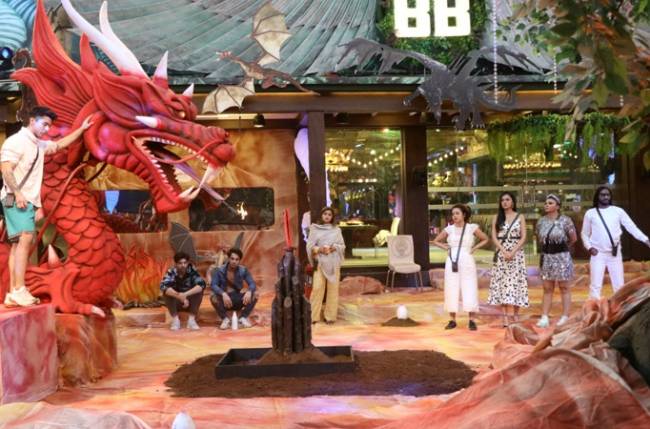 While the viewers are enjoying chilling weather outside their homes, COLORS’ BIGG BOSS turns up the heat in the house like never before. Ever since the race for the ‘Ticket To Finale’ began, the show has turned into a battleground where fights never cease. In tonight’s episode, Tejasswi asks Umar whether he would date Rashami outside the house. Rashami overhears their conversation and gets annoyed with Tejasswi which leads to a heated argument between the two. Rashami lashes out at her saying, “Main aapka aur Karan ka nahi puchhti, aap mera aur Umar ka bhi mat pucho.” Is this a beginning of a new rivalry? Well, we will have to wait and watch!

The flames continue to burn with complete rage during the ‘Dragon Fire’ task. Karan, Tejasswi, Abhijit and Rashami stand a chance to become the second finalist of the season. However, the catch here is that the nominated contestants, namely, Pratik, Nishant, Shamita, Umar and Devoleena will play this game and the winner gets a chance to eliminate one ‘Daawedaar’ contestant from the race to win ‘Ticket to Finale’. Rakhi is the Sanchalak of this task and as the fate of the ‘Dawedaar’ contestants now lies within the hands of the nominated contestant, tables can turn at any point of time. Will there be a second finalist at the end of this task, or will ‘BIGG BOSS’ be forced to make a decision to put them in line?

To find out, ‘BIGG BOSS 15’ presented by TRESemmé, powered by Knorr and Dabur Chyawanprash, beauty partner ‘Lotus White Glow’ and nutrition partner ‘Nourish’ every Monday to Friday at 10.30pm and Saturday-Sunday at 10.30pm, only on COLORS!