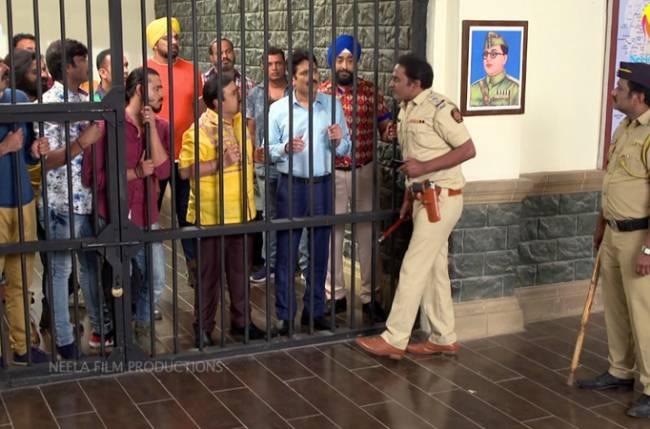 In the upcoming episode of Neela Film Productions Private Limited’s Taarak Mehta Ka Ooltah Chashmah, viewers will see that Jethaalal, Taarak Mehtta and Sodhi land up getting arrested for being involved in a street brawl.

So, after the goons who steal Babeetta’s and Jethaalal’s phones flee, Jethaalal calls up Taarak Mehtta to inform him of all that has transpired. Hearing this, Taarak Mehtta and Sodhi immediately leave for Gada Electronics. They meet up with the people who have stolen the phones and try to reason with them. Sodhi is trying his best to explain to them the reason, why they should return Babeetta’s phone. But somehow, while he is in the middle of a dialogue with them, Jethaalal trips and lands up falling on Sodhi and in turn, Sodhi lands pushing the person he is trying to reason with. This immediately creates confusion and the two sides instinctively get into a brawl.

On the other hand, no one in Gokuldhaam Society has a clue about the three being arrested by the Police. And there is no way they will find out either. What will Jethaalal, Taarak Mehtta and Sodhi do now? How will they convince Inspector Chalu Pandey about their innocence? Will they spend the night in jail? To find out how the trio manage to get out of prison, watch Neela Film Productions Private Limited’s show Taarak Mehta Ka Ooltah Chashmah from Monday to Saturday at 8:30 pm only on SAB TV.