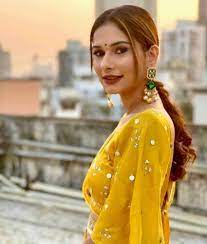 The show is high on drama and she will be seen playing Anuj Kapadia’s sister. Now in conversation with a media portal, Aneri mentioned how she met Mr. Rajan Shahi who was quite keen to work with her.

She added that she has always taken up the role that interested her and weren’t repetitive. She added that she doesn’t mind taking mini breaks in between the projects, and as an artist, she is greedy for characters that excite and intrigue her.

Aneri believes in following heart, which is evident on social media. Despite getting trolled for being skinning, the actress continues to post pictures without letting toxicity affect her.

She said, “What people fail to understand is that just like calling someone overweight, calling someone thin amounts to body-shaming, too. I don’t pay heed to what they have to say about my weight on social media. In fact, I take it in my stride. I can eat as much as I want to and still maintain my weight by working out just three days a week. People need to work harder to attain that.”

Aneri speculated to be in relationship with her Crazy Stupid Ishq co-actor Harsh Rajput. Regarding the same, she said that she doesn’t want to talk about her personal life. She added that at the moment, her energies are focused on work and wants to first achieve everything that she has set out for. It’s only after getting settled professionally she said that she would think about relationships. She concluded by saying that she will speack about this aspect of her life when she feels that the time is right.