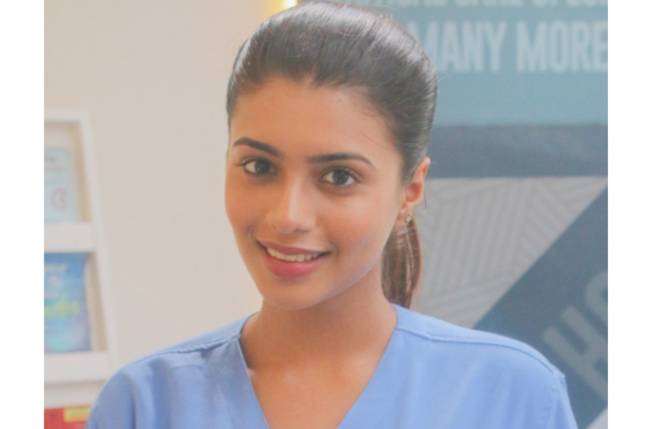 Alma Hussain is happy to have bagged a pivotal part in Nilanjana Purkayasstha and Herumb Khot’s Dhadkan Zindaggi Kii (DZK). The actor plays the role of Dr. Sia Advani in the medical drama.

“Just like the title, the concept of the show is unique, and it’s not like any other regular show which we see on television. Every character has its own story and aspect of life. It’s got an ensemble of the cast with everyone doing their bit. Also, it has been shot extensively and quite well. You don’t get such opportunities every day,” she says.

About Dr. Sia Advani, she adds, “The character has got all the shades of an independent woman. She has all the emotions within her, she’s career-oriented, loyal, smart, bubbly, and she’s a fighter too… The patience my director, Arif Ali sir has shown on me has made me perform better. He made me comfortable throughout the process and I’ll be eternally grateful to him,” she says.

Alma is just 18 and on the show, she has turned the same age, so she does relate to Sia to an extent. “Sia is focused, sincere, and a thorough professional. As a junior doctor, she wants to be the best, give the best. I think Sia and Alma are quite similar. Like Sia, I’m also very hardworking, focused, sincere and bubbly,” she adds.

Thrilled to play a doctor on screen, Alma says, “I could have not asked for a better break than this. I am not playing a normal character, I’m playing a doctor, they have their own characteristics so it was difficult for me in the beginning as I’m very young. This show is authenticating the way the medical industry works, so everything was very technical. The way we hold our equipment, wash our hands, wear the gloves right, the way we behave with our patients, everything is real. There are real doctors on the set to help us through this procedure.”

On working with the team, she shares, I’m glad to be working with Herumb Khot sir and Nilanjana Purkayasstha Ma’am. They’ve pushed me to my level best and the kind of trust they’ve shown in me keeps me going. Nilanjana ma’am, has guided me thoroughly, she asked me to watch real surgeries and watch how doctors are… she has been like a great mentor me! Whenever Herumb Sir is on the set, he’s like a power house, he brings energy to the set! Herumb sir and I share a great bond, he always pushed me to my level best and treated me like I’m his family member… he has always been there for me, he knows it’s my first show and the way he has guided me is just insane..

We don’t often get chances to work with people like them, I’m eternally grateful and thankful to both of them.. they’ve trusted me and I hope I try to keep up with them! I love them both as a human being and they’ll always me my mentors, always.

The TV industry has evolved in terms of content. Alma says that DZK is sort of an evolution.

“It’s good that we are able to watch realistic and relatable content on TV and OTT. The competition between both mediums is tough but healthy. We have seen a lot of shows of women empowerment in the past but Dhadkan Zindaggi Kii is different and touches upon different points. The show is authentic, and hopefully starts a new trend on TV,” she says.

Alma has got used to the new normal, which has also changed the way we work. Initially, it was tough, but now things are much better.

Sharing her learning from the entertainment industry, she says, “I’ve learned that you need to be hardworking, punctual, humble, focused and above all you have to be a good learner because an actor grows with experience. I want to be a learner all my life so that I can become better every day.”