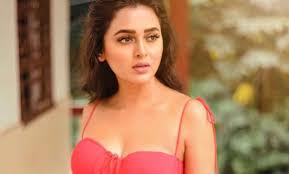 Tejasswi Prakash is a known television personality and has a massive fan following. She is best known for her performance in serials like Swaragini, Karn Sangini, and Silsila Badalte Rishton Ka.

She had also taken part in the reality show Khatron Ke Khiladi, where she was a complete entertainment package

Currently, she is grabbing the headlines for her participation in Bigg Boss 15, where once again, she is entertaining and making the audience laugh.

In the upcoming episode, Tejasswi will be seen flirting with Bigg Boss and calling him her baby. She would be seen talking to the cameras and telling Bigg Boss to send her clothes and her make-up kit as she knows that Bigg Boss doesn’t like it if she looks like this. She requests him to at least send her make-up.

Post her request, Vishwasundari will call Tejasswi to speak to her and will ask her how is the condition of the house, to which the actress said that right now, everything is good and that she was the one that told Bigg Boss to take her make up and clothes.

To which, Vishwasundari tells Tejasswi that she can collect all of the female contestants’ make-up sets from the storeroom.

The Swaragani actress’ happiness knows no bounds and she screams and runs around saying that her baby fulfilled her wish. She thanks him from the bottom of her heart.

Karan Kundrra is shocked at Tejasswi’s reaction and says she won’t be this happy if her clothes come back the way she has got happy seeing her make-up.

Well, there is no doubt that Tejasswi entertains the audiences.