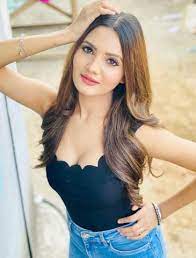 She is also known for her part named ‘Kat’ (Katori Singh). Ashna came into the limelight for her part of Katori Singh (Kat) in Happu Ki Ultan Paltan along with Yogesh Tripathi and Kamna Pathak.

We got in touch with Ashna and asked her if she would like to do a reality show or no to which the actress said that she would love to do a show like Bigg Boss.

She further said that she is a bit skeptical about Khatron Ke Khiladi as she is scared of creatures and reptiles but would love to do Bigg Boss as it’s like a challenge and it’s all about survival of the fittest till the end and she would like to test herself and see if she would be able to survive in such tough circumstances.

We also asked her how her experience has been while working with the producers of the show, to which she said that she has a lovely equation with them and that she is extremely close to Binaifer and said that she is her biggest support system and has always been there.

She recalled that a few months ago she was really unwell and couldn’t shoot for two months and said that how supportive the entire team had been from the production to the star cast to the crew. ‘For those two months, they somehow managed without me and were standing with me as a pillar of strength,’ she said.

In the end, she said that it’s been an amazing experience to work with the entire team.